The Houston Chronicle recently released an article citing an IHS Market report that expects wind O&M to grow by almost 40% by 2027. This has a large relation to the continued aging of turbines, “The North American wind turbine fleet is aging with the average age rising from seven years today to 14 years in 2030.”

Wind turbine gearboxes have been struggling to meet their 20 year design life. There is a 37% chance a wind turbine gearbox will fail due to a bearing failure by year seven. This only increases dramatically as the turbine age beyond that. 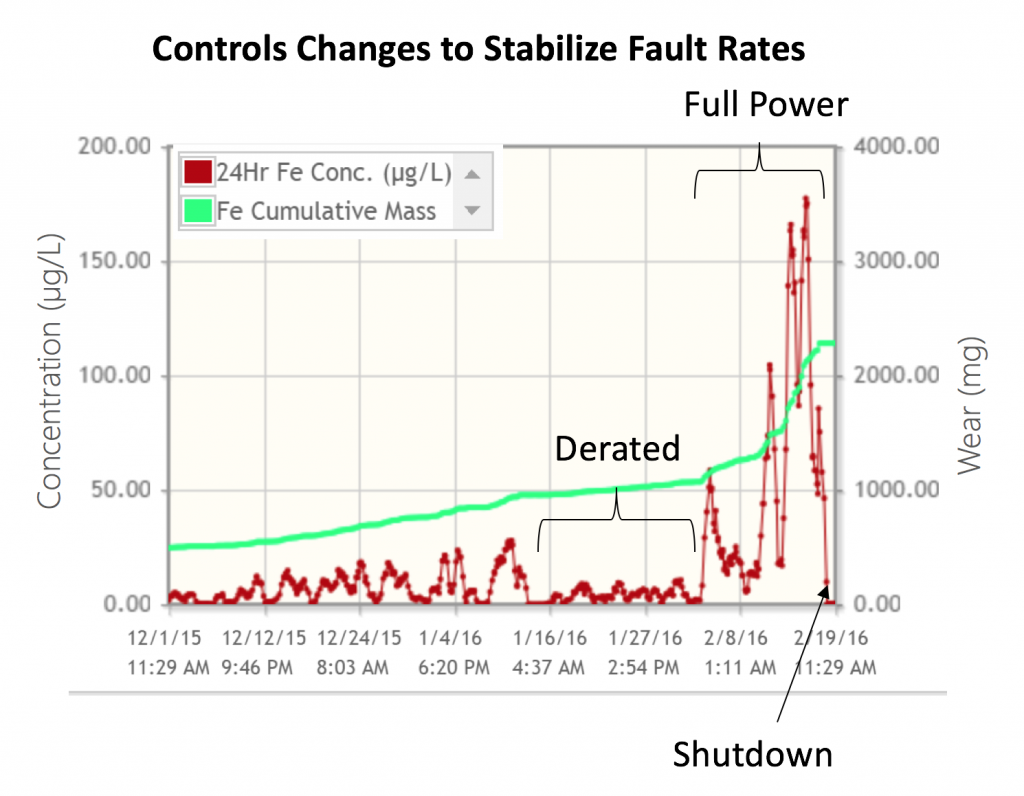 Poseidon Systems has been working with wind turbine OEM’s and operators to implement life extension measurement technologies; by utilizing Poseidon Systems’ wear debris as a life gauge to directly measure the impact their action makes on a wind turbine gearbox. In the graph to the right, Poseidon Systems’ DM4500 was used to measure the rate of fault progression and total fault progression. Based on Poseidon Systems’ past experience with derating, a new derate setting was established to stabilize the fault so the O&M team could optimize replacement uptower. The operator took this derate recommendation and immediately the sensor was able to determine the fault had significantly slowed its failure rate, with only a 10% total production loss. After two weeks, the operator restored the asset to full power per the recommendation of the OEM and the sensor identified a return to an exponential failure rate. Within two weeks the turbine was shut down and left offline until the gearbox could be replaced and returned to service. The use of wear debris monitoring as the primary method for fault severity would have lead to less downtime, extended gearbox life, all while the turbine was still producing power at optimal capacity Many of Poseidon Systems’ customers have used these techniques to extend the life of gearboxes by up to two years, waiting for optimistic replacement opportunities, and adjusting based on the feedback from the sensor. You cannot undue damage in a gearbox, you can only prevent it. Wear debris is the earliest point in time when a gearbox fault can be detected. Poseidon Systems’ offers the most advanced and cost effective system available. OEM’s and operators can start eliminating portions of the expected 40% increase in O&M investment today; through Poseidon Systems’ gearbox monitoring system with a certain >1,000% ROI.
← Before Digitalisation Comes Digitisation Poseidon Named Finalist for 2018 Technology & Manufacturing Awards →