Now is the Time for Real-Time Monitoring

Too often, faults develop far enough in wind turbine gearboxes that they require extremely expensive secondary damage that increases unplanned downtime for repairs. However, these faults could have been detected much sooner by online sensors finding and alerting operators to abnormal patterns of wear debris generation happening in the gearbox.

Online wear debris sensors provide the unique capability of constantly monitoring the levels of ferrous and nonferrous wear debris particles within a wind turbine gearbox. Accelerating wear generation rates and momentary surges in particle counts can be easily recognized and acted upon before a critical gearbox failure occurs. The utility of online wear debris monitoring as a means of detecting mechanical component failures and continually assessing their severity is best illustrated by a timeline of historical data from a gearbox with such a failure. 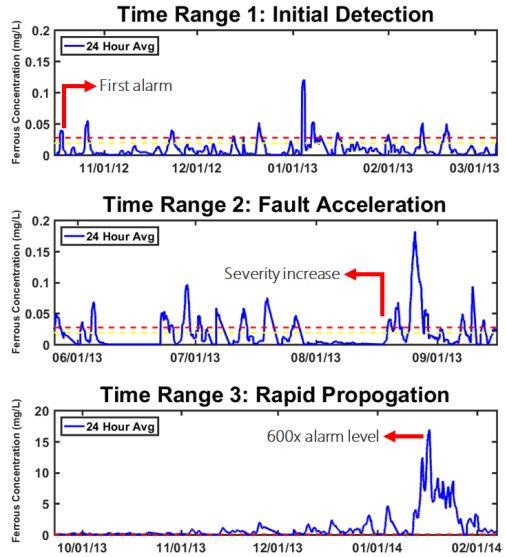 One example of this happening to a Poseidon customer is showcased below and by the accompanying graphs:

The fault was initially detected in Time Range 1, and the customer was notified about it so they could continuously monitor it and determine the most optimal time to repair it.

The fault continued to develop in Time Range 2 and the severity increased, as can be seen by the increasing magnitude in concentration spikes.

Over a year after the initial detection of abnormal wear debris generation, during Time Range 3, a rapid increase in both peak ferrous debris concentration and a corresponding decrease in the amount of time between these peaks indicated greater probability of catastrophic component failure. Based on this escalation reported by the debris monitor, and in order to avoid such a failure, the turbine was de-rated and subsequently repaired. Upon investigation it was found that indeed the gearbox damage had propagated as an axial crack in two planet bearing raceways with significant secondary damage in the adjacent area.

During this 14-month timeline, periodic oil samples were taken for analysis with no significant findings. In fact, the reported oil cleanliness actually exhibited improvement based on reported ISO cleanliness codes as concentration levels reported by the online debris monitor increase. It is important to note that although the peak debris concentrations were increasing, the momentary concentrations remained highly variable. Mechanical faults such as the one observed in this example can propagate quickly, developing from a state of low risk of major component failure to high risk in a matter of weeks, if not days. Online debris monitoring of metallic debris enables these changes in severity to be observed and tracked in real-time, allowing adjustments in operation to prevent catastrophic failure and extend operating life until a repair or replacement can occur.

To learn more about the limitations of offline oil analysis, download our white paper co-authored by EDF Renewables on the subject here!