One of the best ways to see how online oil condition monitoring can help your business is by seeing how it helped others:

In large vehicles, fluid leaks from any number of areas can cause severe damage and even catastrophic failure if they leak into and contaminate the engine oil. This in-field application of Poseidon Systems’ online oil condition sensors showcases how online oil condition monitoring can detect these kinds of leaks with great specificity before they lead to expensive damage and prolonged downtime.

Water and fuel contamination both lead to great changes in the oil quality. Poseidon Systems sensors use Electrochemical Impedance Spectroscopy (EIS) technology to measure oil condition through simultaneous characterization of the entire lubricant, including both interfacial impedance measurements as well as bulk resistance measurements. You can read more about the benefits of EIS here.

A large vehicle engine operated by one of Poseidon’s customers was exposed to contamination events that let both fuel and water into the engine oil. The graph below shows two features from the impedance spectrum in response to contamination events that occurred in the engine. The bulk resistance, shown in the top figure, is primarily impacted by changes to the additive package and to contaminations which significantly affect the fluid impedance. The interfacial impedance, shown on the bottom figure, indicates the strength of the surface protection additives. 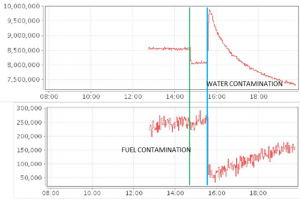 The fuel contamination event is detected as a more rapid drop in bulk impedance due to the difference in the impedance of fuel and oil. Given enough time, the fuel would also accelerate oxidation and additive depletion leading to an accelerating decrease in bulk impedance. In the time frame of this test, fuel had no impact on the surface protection additives.

The response to water contamination is more dramatic. As the water is broken into small droplets and absorbed by the oil, the impedance drops off. After the event, the measured impedance level is lower due to the additive depletion caused by the contamination. Take note the contaminations have opposite influences on the impedance measurements. Therein lies the risk of using a single parameter device to attempt to characterize a complex system such as a degrading oil.

This multi-feature approach allows Poseidon’s EIS sensors to detect and identify leaks into engine oil as soon as they occur, enabling the fastest and least expensive repair possible to the engine and prevent future leaks. Furthermore, the ability of Poseidon Live’s data collection to classify the nature of the contamination due to the response allows for faster discovery of the root cause of the problem.